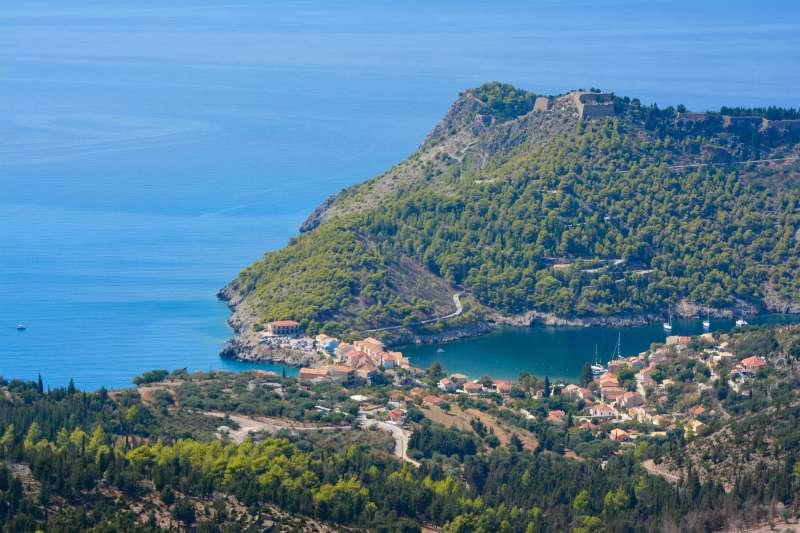 Are you dreaming of turquoise blue water and sandy beaches glittering in the sun – preferably away from the big crowds of tourists in an untouched island paradise? Then click through our selection of the ten most beautiful islands in Europe and let yourself be inspired for your next dream vacation.

We begin our journey at the westernmost tip of Europe on the island of La Graciosa, north of Lanzarote. With an area of ​​just 29 km2 and just under 800 permanent residents, it is one of the minor Canary Islands. There are no paved roads in this holiday paradise, but there is a lot of beautiful and original nature. The dunes and secluded beaches are simply breathtaking. The picturesque island can be reached by ferry from Lanzarote in a 35-minute crossing.

Spain’s most beautiful and whitest sandy beaches are not on the Mediterranean Sea but in the northwest of the Iberian Peninsula – in Galicia. The island paradise of Las Islas Cíes, with just three permanent residents, is an hour’s boat ride from Vigo. Because of the many natural highlights, the Las Islas Cíes is also called the Spanish Galápagos. There is no infrastructure on the islands, such as hotels or restaurants, but there is a campsite. You should book a pitch for your tent early on, as the slopes are limited and extremely popular.

South of Mallorca is the small island of Cabrera, where many Mallorcans flee from the flood of tourists on the well-known sister island in the high season. The military used the idyllic island to be heavily contested as a strategic point. A fortress from the 14th century still bears witness to this. Today, the magical island is a peaceful natural paradise that offers many excellent hiking trails and places to pause.

You can also find an island pearl in Croatia. It offers everything a vacationer’s heart desires: beautiful and hidden mini bays, picturesque villages, wild nature, and lots of sunny days. The island near Zadar is also home to two of the most beautiful beaches and bays on the Adriatic coast; Saharun and Telascica embark on a discovery tour. Diving fans can look forward to a breathtaking holiday highlight with the Brbiscica underwater cave.

Another island where mass tourism has not yet arrived is Samothraki’s Greek island in the North Aegean. The small island with fascinating cliffs has a lot to offer: incredible flora and fauna, charming waterfalls and sulfur springs, secluded beaches, and many great hiking trails. You reach the unknown, mystical dream island by ferry from the Greek mainland.

We stay in Greece for a moment and deploy to Karpathos, a real gem. The southernmost island is known as the secret Santorini. The unknown island has a lot in common with the famous tourist magnet. The many small white villages with hip restaurants are just as delightful as the wild nature, the azure water, and the numerous dream beaches and bays. You may be in Europe, but here you will feel like you are in a Caribbean island paradise.

Picture perfect beaches, golden dunes, historic accommodation, and a uniquely barren and idyllic landscape – this is the island of Colonsay on the coast of Scotland, which belongs to the archipelago of the Inner Hebrides. For lovers of Nordic beaches, this holiday oasis is one of the most extraordinary and unspoiled island destinations in Europe. There are only two hotels on the island (including the cozy “The Colonsay Hotel” ).

Is there a lonely and beautiful island on the Côte d’Azur? Yes! The island of Port Cros is the little sister of the much better-known island of Porquerolles. Port Cros is a nature reserve, so no cars or bicycles are allowed on the island. But it is worth exploring the island on foot with hiking boots. Because the white sandy beach and the crystal clear water at the Plage du Sud are unique and the underwater world is probably the most beautiful in all of Europe. For snorkeling, La Palud offers the best options.

Of course, you can find the best European island for cycling in the cycling mecca of Holland – namely on the West Frisian Islands. Our insider tip is Terschelling, which boasts beautiful sandy beaches and dunes. Terschelling offers families and demanding cyclists more than 60 km of varied cycle paths with breathtaking panoramic views along the North Sea. You can hire the bikes at the arrivals dock where the ferry from Harlingen in the Netherlands docks. After the bike tour, the picturesque village of Midland invites you to relax and shop.

The island of Gozo, which belongs to the Republic of Malta, is a regular in the top 10 rankings of the most beautiful islands in Europe but is still an insider tip for travelers looking for an island paradise without many tourists. The island, which can be reached from Malta by ferry within 30 minutes, is white with rocky bays, dream beaches (such as the reddish-gold Ramla l’Hamra beach), azure-blue lagoons, XXL temples (older than the pyramids in Egypt), and charming seaside towns.