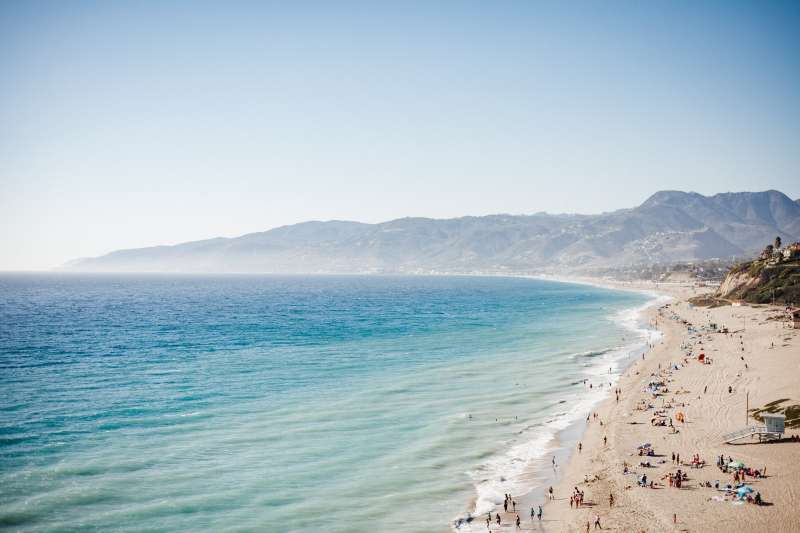 Malibu is distinguished by its magnificent beaches and the following is a selection of the best ones for surfing, swimming, walking, sunbathing, and practicing other sea and sand entertainment in this charming Californian coastal town.

Zuma Beach is a long and wide beach more than 3 km long in Los Angeles County, in Malibu, with enough parking spaces to host a Superbowl. Unlike most Malibu beaches, there are no houses between the Pacific Coast Highway and the ocean. It is one of the most popular beaches in Los Angeles due to its excellent provision of services and facilities, including several lifeguard posts, restrooms, showers, picnic tables, sports fields, and a children’s area.

Zuma Beach is visited for surfing, volleyball, diving, windsurfing, fishing, swimming, bodysurfing, and bodyboarding, among other entertainment. It has a strong undertow and a gradual slope, so it is very pleasant to walk toward the waves.

It’s a long, narrow beach off Pacific Coast Highway, between the Latigo Shores neighborhood and the houses on Malibu Road. There is a cluster of houses in the center of the beach where Solstice Canyon meets the shoreline.

Although a little out of the way, the best parking is in a public lot next to the Malibu Seafood Fish Market in Corral Canyon Park. This park has a walking route that starts from the parking lot and goes under the highway to get to the beach. You can also park on the highway shoulder.

Dan Blocker County Beach is visited for walking, sunbathing, and sports such as diving, snorkeling, fishing, and hiking. In summer there are lifeguards.

It is one of 3 beaches at Robert H. Meyer Memorial State Beach Park, in the Santa Monica Mountains National Recreation Area. It is the closest to Malibu and the most popular.

It has marked parking along the Pacific Coast Highway and also has a private parking lot on a cliff with picnic tables and great views of the ocean. From the cliff, there is a path and then a staircase that leads to the beach.

It is a sandy area frequented by professional photographers and models for photo sessions and by people who go to sunbathe and watch the sunset. Other entertainments are hiking, swimming, snorkeling, bird watching, and cave exploration

It is the westernmost of the 3 beaches in the Robert H. Meyer Memorial State Beach Park. It has a private parking lot on the cliff that is next to the Pacific Coast Highway and a path that leads to the sandbank, which is the shortest of the trio of beaches.

El Pescador is a pleasant cove of sand, rock formations, and tide pools that form at both ends. If you walk towards the west you will find an almost secret beach called El Sol Beach, which lacks access.

Public access to this beach has been the subject of long-standing controversy since it became the property of Los Angeles County in 1976.

It was called Disney Overlook (Ignore Disney) by the creators of the mobile application, Our Malibu Beaches because the most prominent opponent of the public entrance has been Michael Eisner, CEO of The Walt Disney Company for more than 20 years.

The beach lacks parking and direct access, making it one of the most secret beaches in Los Angeles, which can be reached by walking east from Nicholas Canyon Beach or west from El Pescador State Beach.

Both paths are rocky and it is best to go at low tide. The reward for the effort is that you will have an almost empty beach.

It is a south-facing beach east of Point Dume, in Malibu, California. Its most direct public access is off 27148 Pacific Coast Highway, on the bridge over Escondido Creek, although parking can be a problem.

Entering this entrance, to the right is Escondido Beach and to the left is the beach facing Malibu Cove Colony Drive.

Another access is a long public staircase to the west of Geoffrey’s Malibu restaurant, an entrance that leads to the widest and most secluded part of the beach with a small public parking lot.

As with most Malibu beaches, there is little sand left at Escondido Beach when the tide comes in. The main activities are hiking, diving, kayaking, and beachcombing.

La Costa Beach is a Malibu state public beach that lacks public access and is therefore used privately. Arrival is comfortable only through the houses on the Pacific Coast Highway, between Rambla Vista and Las Flores Canyon Road.

There is no longer public access through the Duke’s Malibu restaurant parking lot and the state of California or the county has been unable to install an entrance somewhere between the houses that line the beachfront.

The way to get to La Costa Beach is from Carbón Beach (east access next to David Geffen’s house) and walk about 1600 meters to the east at low tide.

The beach is used by walkers and sunbathers. It has no public facilities, nor are dogs allowed.

La Piedra State Beach is in the middle of the set of 3 beaches in the Robert H. Meyer Memorial State Beach Park, west of Malibu. It is flanked by luxurious houses on both sides, but the mansions are barely visible from the sandbank.

Access is through a parking lot off Pacific Coast Highway, where a path and steep stairway descend from the cliff to reach the beach.

La Piedra is dotted with rocks and has tide pools that are exposed near the access trail when the tide goes out.

It’s a Malibu beach on the eastern side of Malibu Road, next to Malibu Bluffs Park. It has several corridors for public access along the avenue and the beach is wider in the part without houses.

On the hillside above Malibu Road, some trails lead into the park and provide a good opportunity for hiking. The beach almost completely disappears when the tide rises.

Although it lacks tourist facilities, Amarillo Beach is a suitable place for sunbathing and surfing, hiking, and diving. Access to dogs is not allowed.

Las Flores Beach is a narrow state beach east of Las Flores Creek, near Las Flores Canyon Road and Duke’s Malibu Restaurant. Access to this food place was closed and now the beach has no official entrance.

Some unofficial accesses have been made, but residents often block them or put up signs noting their illegality. The closest “official” pass is through Big Rock Beach (2000, Pacific Coast Highway), from where you can reach Las Flores Beach by walking more than 4 km along a sandy and rocky path, at low tide.

The beach is mainly used for walking. It has no service facilities and dogs are not allowed.

Las Tunas County Beach is a rocky beach in eastern Malibu, an area where the shoreline is eroding so much that authorities are taking steps to protect the Pacific Coast Highway and the homes below.

The narrow beach of Las Tunas is mainly used as a fishing spot. The sand is not wide enough to sunbathe comfortably and the noise coming from the highway is annoying.

It has a small parking lot at 19444 Pacific Coast Highway. Apart from fishermen, it is also visited by divers. It has lifeguards and restrooms. Access to dogs is not allowed.

Latigo Beach is on the east side of Latigo Point, more accurately, below the condominiums and homes that line Latigo Shore Drive. It has its easements clearly defined and almost the entire beach is public, both wet and dry. You just have to stay about 5 meters (16 feet) from the first condominiums.

Although little known, Látigo Beach is a very nice beach to stretch your legs and sunbathe. It is quieter than other Malibu beaches as it faces southeast and is protected by Latigo Point on the west side.

At the western end, accessible tide pools are formed at low tide. Walking west and at low tide, you will reach Escondido Beach. The sandbank extends to Dan Blocker County Beach to the east.