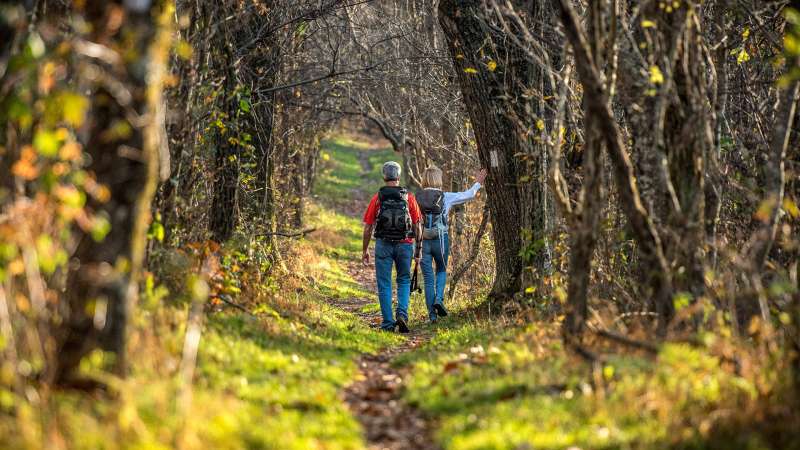 There are many tiny towns to live in the United States, and if you plan on hiking the Appalachian Trail, you’ll have a front-row experience to some of the greatest. Hoping on and off the trail to tour a few of these charming towns will add time to your journey, but believe us when we say it will be well worth it. Continue reading to learn about 10 of our favorite little villages along the 2,190-mile trail, ideal for “thru-hikers” as well as day hikers.

This idyllic village, replete with mountain vistas, lakefront cabins, and a population of 1,157 people, looks like something out of a country ballad.

Despite the relatively small-town status, there are plenty of lodging options. If soaking up views of the Blue Ridge Mountains from a rooftop bar and restaurant seems like your ideal day off the path, the newly launched Hampton Inn Blue Ridge is for you. Visit Swan Drive-In, one of Georgia’s last three remaining drive-in theaters, for some fun. If you have more time, take the Blue Ridge Scenic Railway for a 26-mile ride through the lush countryside, beginning at the town’s historic depot.

The Appalachian Trail passes through this town of 285 people, and it is the headquarters of the nonprofit Appalachian Trail Conservancy, where visitors can pick up guides and maps, learn about the trail from staffers, and buy souvenirs.

The town is also historically significant. John Brown’s assault, which was widely regarded as the “dress rehearsal” for the Civil War, took place here in 1859 to foment a slave insurrection. Throughout your stay, you can see Brown’s fort as well as other historic sites such as St. Peter’s Catholic Church and the site of the 1861 Battle of Bolivar Heights, an early Civil War battle. Harpers Ferry National Historical Park, a rebuilt 19th-century manufacturing community and its natural surroundings, is another area attraction. Visit the park’s Jefferson Rock overlook or The Point to see where the Potomac River meets the Shenandoah River when your feet are sufficiently rested.

If you’re looking for a thrill during your layover, go whitewater rafting or tubing on the Potomac River with River Riders, or check out their aerial adventure park or zip-lining course, which includes a 1,000-foot zip line over the river. Grab a bite at The Anvil Restaurant (the giant lump crab cakes and hot crab dip are both fantastic) or The Rabbit Hole for American classics and patio hangout sessions when your stomach starts to grumble. As night sets, retire to the quaint Town’s Inn or the equally quaint Stonehouse B&B, both of which were built in 1839 and offer a “doily-free setting.”

North Conway, a village 28 miles south of New Hampshire’s most famous mountain, Mount Washington, is no stranger to AT walkers. Whether you’re looking for a post-hike massage at Sacred Circle Wellness or celebratory drinks and burgers at Delaney’s Hole in the Wall, the locals will make you feel right at home.

Stay at the North Conway Grand Hotel, a White Mountains getaway that is especially beautiful in the fall when the foliage is at its height. If you fall in love with the town, be sure to return in the winter for a ski trip. Wildcat Mountain, one of the state’s few hand-cut ski areas, was built by members of the Civilian Conservation Corps, a federal program established in the 1930s. (It’s also a mountain on the AT that you pass on your way out of Mount Washington.)

With a population of around 42,000 people, Cortlandt is one of the larger towns on this list, but it still feels like a small village along the Hudson River. The historic Kings Ferry crossing location between Stony Point and Verplanck’s Point is where George Washington’s army crossed the Hudson River on their way to Yorktown, Virginia, in 1781.

If possible, go on Sunday to shop at the Market on the River in Verplanck (approximately five miles distant) before relaxing on the lawn or fishing pier at Cortlandt Waterfront Park. Spend a night at The Abbey Inn in Peekskill, four miles away, for a treat.

The old Episcopal Sisters of Saint Mary’s convent, built-in 1902, has been transformed into a boutique hotel featuring the Apropos farm-to-table restaurant and bar, as well as a spa.

Due to festivals like the Jacob’s Pillow International Dance Festival and places like Mass MoCA, Clark Art Institute, and Tanglewood, the Boston Symphony Orchestra’s summer home since 1937, the Berkshires have an astonishing blend of first-rate art.

Although this region is home to several fantastic small towns, including rural Monterey and hipster North Adams, we prefer old Adams. Susan B. Anthony, a women’s rights leader, was born in this village of 8,170 people. Mount Greylock, Massachusetts’ highest peak with a height of 3,489 feet, is also located here.

If camping at Mount Greylock isn’t your thing, sleep at the famous TOURISTS in North Adams, a throwback to the American roadside motor lodge with posh trimmings.