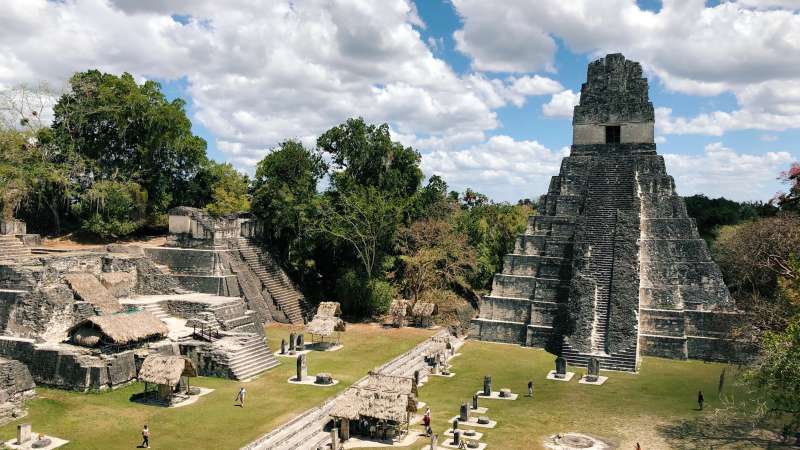 Guatemala contains treasures bequeathed by the Mayan civilization, beautiful colonial monuments, natural reserves of great beauty, and dream beaches in the Caribbean and the Pacific. We invite you to discover our selection of the best tourist places in Guatemala.

The main postcard of Guatemala in the world is one of the most important architectural ensembles of the Mayan civilization. It is located in the municipality of Flores, in the department of Petén, and was one of the most powerful kingdoms in pre-Hispanic Central America.

It houses a number of temples, with Temple IV being the most important. At 70 meters high, it is the tallest pre-Columbian structure on the American continent. The pyramid was built by Yik’in Chan Kawil in the 8th century and is believed to be the ruler’s mortuary building.

In Tikal, 7 courts have been uncovered for the ball game, including a sports complex made up of 3 courts, located in the Plaza of the Seven Temples, a unique fact in Mayan sports architecture that illustrates the dimensions and relevance of the town.

Other important buildings and elements of Tikal are the Pyramid of the Lost World, the Palace of the Bats, the altars, the lintels, and the stelae.

Builders used wood from the sapodilla tree to make lintels that were elaborately carved by Mayan artists. The Tikal lintels are the most elaborate in the entire Mayan world. The stelae are carved with glyphs and images of the most notable monarchs of the kingdom.

2. Basilica of the Black Christ of Esquipulas

Esquipulas, in the department of Chiquimula, is one of the most important pilgrimage centers in Latin America due to the famous Black Christ that houses the city’s basilica. The Basilica Cathedral of Esquipulas is the largest Christian temple in Central America and the most visited, receiving almost six million faithful annually.

The main singularity of the temple is its four bell towers, unique in American religious architecture. It is rectangular in plan with a dome in the center and a 50-meter-high tower at each corner.

The Black Christ or Lord of Esquipulas, a figure of Jesus Crucified, is one of the most revered images of Christianity. He arrived in Esquipulas in 1595 and according to tradition, the pilgrimages began when people from all over went to the church to admire the beautiful work of imagery.

Research has shown that it was carved from light wood and turned dark by candle smoke and the hands of the faithful.

Motorcyclists may not have a reputation for devoutness, but the Black Christ is capable of summoning a pilgrimage of 50,000 motorcycles that departs from the Guatemalan capital each year.

The construction of this building for the residence of the Captain-General began in 1558 and fulfilled a variety of functions, among them, headquarters and room for the judges of the Royal Court, Royal Box, barracks for the Dragoons Battalion, jail, cellars, and orchards.

Several earthquakes that occurred throughout the 18th century caused severe damage to the palace, which was looted. The authorities decided to move the capital and the palace was stripped of doors, windows, balconies, and everything that could be useful in the construction of the new city.

It was restored at the end of the 19th century, but again the earthquakes of 1942 and 1976 caused heavy damage to the building.

After the declaration of Antigua Guatemala as a Cultural Heritage of Humanity in 1979, it was rebuilt and renovated again and is currently the headquarters of several government agencies, including the departmental government, the national police, and the Guatemalan Institute of Tourism.

The Palacio de Los Capitanes Generales was one of the first palatial buildings erected in Central America and is a Guatemalan architectural icon, with its imposing arches on two levels.

There is no agreement on the origin of this lake with no visible outlet, whose Nahua name means “between the waters”. Some scientists think that it is the extinct crater of an ancient volcano and others point out that it originated because the volcanic activity interrupted the course of the rivers, damming the water.

A legend indicates that in the place of the lake there was an island that was the seat of an important Mayan locality during the Preclassic period.

It is the main national freshwater reserve and one of the best tourist places in Guatemala, with activities such as kayaking, cruises, cycling, hiking, hiking, mountaineering, biodiversity observation, and cultural observation in riverside and nearby towns.

It is an elegant building with double arches and Tuscan columns, located next to the cathedral, in front of the Central Park, which is the municipal seat of Antigua Guatemala.

It was built between 1740 and 1743 and withstood quite well the devastating earthquakes of 1773 that destroyed much of Antigua Guatemala and caused the capital to move. However, the looting and abandonment of the city caused more damage and loss than the earthquakes and the palace remained in a dilapidated state until the 19th century when it was rehabilitated.

In 1851 a clock was placed and for several decades it was a municipal jail. One of its current tourist attractions is the Cell of La Tatuana, in which a woman accused of witchcraft was held. La Tatuana supposedly escaped from prison in a magical ship that she drew with charcoal on one of the walls of her cell.

In 1956, the Museo de Armas or Museo Santiago opened in the palace. The sample is divided into five rooms that exhibit paintings, sculptures, ceramics, heraldic works, colonial weapons, blacksmithing pieces, and furniture.