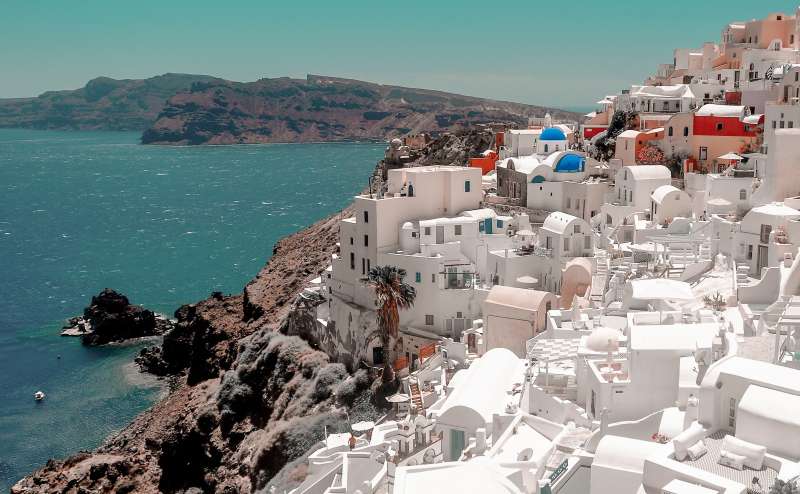 The luxury boutique hotels of Santorini have front-row seats to one of the world’s most stunning seascapes.

The island is undoubtedly the most picturesque of the Cyclades, the southern Aegean’s white-washed Greek island group. Like seven-minute icing on a Christmas fruitcake, villages of boxy white dwellings and white painted caves cling to the tops of 1,000-foot cliffs, the rim of a lava-stained caldera. The entire island is essentially a massive, dormant but still active volcano, with cliffs that form the lagoon’s edges. The visible evidence of that “dormant” volcano, continuously spitting sulfur into the sea, is a blackened island in the middle, Nea Kameni.

With plains that drop away to beaches to the west, behind the cliffs, one would wonder why so many beautiful villages, replete with pricey, luxury hotels, restaurants, and stores, chose to develop across the volcanic caldera’s rim and slopes. Maybe it’s the volcano. It’s best to keep a close eye on it. Its eruption wiped out the Minoan civilization — both here and on Crete — about 4,000 years ago. It exploded three times during the twentieth century, the most recent being in 1950. Meanwhile, you may have a champagne-fueled good time at one of these five magnificent hotels.

Santorini’s luxury hotels come in a startling diversity of shapes and sizes, each with its unique qualities, despite their superficial similarity.

Early residents of Santorini, principally visiting fishermen seeking refuge from the elements and Venetian merchants keeping their wares, occupied caves on the caldera’s face, some naturally occurring and the majority dug out of volcanic basalt to suit their needs. Cave villages grew up over time (some as residences, others as shops and workshops). Some of these are occupied by iconic Santorini.

The hotel’s suites range in size from two to three bedrooms. Each apartment includes a large, sun-drenched terrace with loungers, a table and chairs, shade umbrellas, and a view of Nea Kameni that changes with the seasons. Breakfast is served at your convenience, and the soft ring of the bedside phone alerts you that it has arrived.

Each well-equipped apartment is comprised of plastered and white-washed caves with ample lighting to compensate for the lack of windows. The enormous tunnels provide cool relief from Santorini’s relentless, burning heat, rather than appearing claustrophobic.

Andronis Luxury Suites is a collection of spacious suites and villas that stretch down the face of the Caldera from Oia’s highest point (pronounced EEE-yah for reasons mysteriously related to the Greek alphabet). Oia, the island’s northernmost settlement, is home to the majority of the island’s high-end luxury shopping, and it’s also where thousands of visitors rush the small streets after sunset in search of the greatest view.

However, once you’re inside your suite, the entire world vanishes.

The Myst Boutique Hotel, Santorini’s newest hotel, debuted in May 2018. This tranquil resort for couples and friends who want a more barefoot, relaxed atmosphere is less theatrical and self-consciously romantic than many of its Caldera neighbors.

The family-run hotel is less than a kilometer from Oia, on the edge of the Tholos plains. It’s close enough to the fashionable town for a night out on the town or a shopping spree without the crowds.

The views, which span agricultural fields and vineyards to a turquoise Aegean horizon, are similarly tranquil. Most accommodations have west-facing terraces and beautiful, turquoise tile-lined Jacuzzis, except pool view rooms. The location is ideal for viewing the sunset into the sea. The bulk of mountainous Ios is visible from the pool and restaurant terrace after the morning heat haze has burned off the sea.

The hotel’s design and color scheme reflect a classic blue and white Cycladic palette filtered and softened by a modern sensibility, from its cool, white entry arch (reminiscent of the gates of Mycenae) to the short flights of grey steps between pristine white walls. Greys and taupes soften the brightness of white walls, which may be blinding. The acute punctuation of turquoise is replicated in the beach towels abundantly given in various spots, as well as in the gigantic, square horizon pool (perhaps the largest on Santorini). The pool is surrounded by soft grey loungers, with two “floating” beds on one side.

The comfort factor is boosted by meticulous attention to detail. There are pillow-topped mattresses in the beds; non-slip tiles in the shower, within and beside the hot tubs; Apivita products from Greece; French designer towels and linens; bedside USB connections; and flat-screen televisions with cutting-edge controls.

Breakfast can be enjoyed on your private terrace or the restaurant’s well-shaded terrace. There are a buffet of fruits, juices, slices of bread, cheeses, and cereals, as well as omelet and waffle “stations” and a cooked breakfast menu.

Light lunches and dinners, as well as beverages and wines, are provided poolside or in the outdoor restaurant. The brand new restaurant was still under construction when we arrived. Salads were crisp and flavorful, and the small menu of grills and pasta was well-presented.

There are 19 suites with prices ranging from €432 to €725 per night, with significant reductions available for pre-paid prior reservations. Private patios with pool views or private, outdoor heated jacuzzis are available in each room.

The Andronis Concept Wellness Resort rises out of the environment just outside Imerovigli, the highest settlement on the Caldera, an earth-toned bulk more reminiscent of New Mexico than anything you’d expect to see in the Cyclades.

Twenty-five rooms on two levels, all with terraces with mildly heated outdoor infinity pools, tables, chairs, and loungers, all face the sunset.

The centrally located spa offers a wide range of treatments and massages, all of which are reasonably priced and use Valmond and Thalgo products. A steam room, cold and four-season showers, and a windowless basement gym with a variety of torture equipment are among the amenities.

The main pool, located outside the spa area, is the island’s largest – a long, narrow, unheated lap pool with a horizon edge that bends around a sun-lounger-lined patio. The heated “cave” pool with a waterfall adjacent to the terrace was a highlight for us.

On the negative, because it is located above the Caldera rather than within it, the terrace areas can become windy and, in the early season, cooler than the rest of the island, rendering the private pool, loungers, and table and chairs useless.

There are 25 suites, with prices ranging from around €1,200 per night for the basic “Cozy Suite” to €2,100 for the multi-level “Fabulous Suite” that sleeps four people.

The hotel is pet-friendly, and it became Caldera’s first family-friendly hotel in 2018. There are currently no child-friendly activities, meals, or facilities, however, we did spot a young boy having a fantastic time in the subterranean pool with his father.

Hundreds of tourists crowd the remains of Oia Castle on Santorini’s northwest edge approximately two hours before sunset, carrying Nikons, iPhones, and selfie sticks for the daily spectacle of the sunset. If you’re a guest at the Oia Mansion, you may toast each other with cocktails while watching the spectacle – both the sunset and the crowds of tourists — from your private rooftop refuge, far above the commotion.

Or, even better, you can watch from the comfort of your warm hot tub, which is ideally angled to salute the sun’s final rays.

Since 1870, the Nomikos family of ship captains and ship owners has owned the home, a remarkable pink and blue confection on four stories with stunning views of the lagoon and the open sea. It’s a neoclassical monument, a certified Greek Cultural Heritage Building, and a very nice four-bedroom house. In a combination of period elegance (dining room, sitting room, captain’s office) and traditional island design, Oia Mansion can accommodate up to eight very lucky guests (minimalist, white-washed bedrooms, most with outdoor access).

Even though it is a villa, its rooms and facilities are hired and priced by the night, giving it the feel of a boutique hotel. It’s on one of Oia’s main streets, and its gated front terrace, complete with a table and umbrella, is frequented by locals and tourists alike. That terrace, on the other hand, is only for show. There’s a wonderful, coral-painted internal patio for outdoor dining and relaxing, as well as a nicely-furnished roof deck. In the event of bad weather, there’s also a formal dining room.

Most approved religious rituals (except Greek Orthodox, which must be performed at one of Santorini’s many churches) can be performed in the house, which is nicely set up for modest weddings and wedding banquets. It’s ideal for family reunions or groups of friends, but it’s also suitable for a couple and priced comparable to other Santorini boutique hotels.

Eight people can be accommodated in four bedrooms. In season, prices range from €1,512 per night for two persons with a two-night minimum stay to €3,000 per night for eight people with private shuttles and a three-night minimum stay. The property is open all year, including Christmas and Easter, with early spring and autumn rates being significantly reduced. Children under the age of six stay for free.