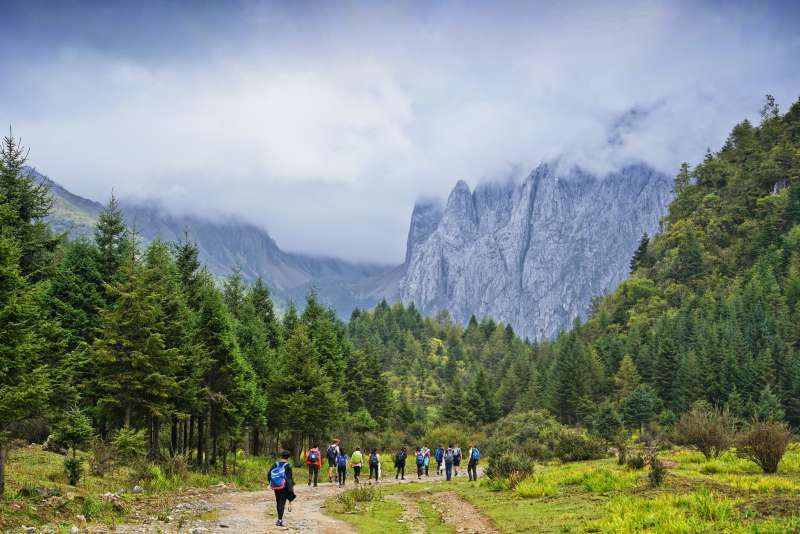 With its almost floating mountains, deep gorges, and untamed stretches of the Great Wall, China’s scenery has inspired legends, movies, and many a hiker. Hikers can go past rice terraces, through vast bamboo woods, and into a rainbow mountain environment. Several paths to the tops of holy Daoist and Buddhist mountains are available, while a lake with changing hues in the north offers hikes along a boardwalk with views of grasslands. Read on to learn about some of the best walks in China, as well as the landscapes and legends surrounding them.

Between Jade Dragon Snow Mountain and Haba Snow Mountain, high above the creamy brown Jinsha River, the Tiger Leaping Gorge’s eponymous route snakes for 18 km. It is located near Lijiang in Yunnan province and is well-known but not overdeveloped. Along the way, you’ll encounter mountain massifs, rice terraces, rivers, villages, and woods. According to Chinese legend, a tiger once leaped across the river to elude a hunter, thus naming the gorge. It usually takes two days to hike, with a two-hour hard ascent followed by 28 bends (moderate switchbacks) before leveling off. Warm meals, fresh beer, and simple but pleasant lodgings are available at several guesthouses along the trail.

Hike the five summits of Huashan, China’s most perilous mountain, only 30 minutes from Xi’an in Shaanxi province. The 7,066-foot-high Huashan, one of China’s five sacred Daoist mountains, used to be home to monasteries and martial arts training fields, but its international popularity stems from its tiny via ferratas. The Plank Walk, a foot-wide network of boards attached to the mountain, leads to a shrine on the south peak, while the Chess Pavilion is reached via Ferrata. Onsite, protective harnesses can be leased. It takes slightly over 13.6 miles to hike all of the summits.

The Ping’an Rice Terraces and the Jinkeng Rice Terraces, also known as the Dazhai rice terraces, are located 50 miles north of Guilin and are made up of two areas: the Ping’an Rice Terraces and the Jinkeng Rice Terraces. Unlike other Chinese rice terraces, these can be visited all year for views of water-filled mirrored tiers, green saplings, or golden ripe rice depending on the season. The majority of hikers prefer short hikes among the terraces, notably in Dazhai, where routes range from four to seven kilometers, but hiking between Ping’an and Dazhai is also available (about four to five hours). Hiking here allows hikers to engage with some of China’s ethnic minority tribes, the Yao and Zhuang, who have farmed the area for the last 800 years.

Though hiking in the Rainbow Mountains in Gansu province is not possible due to the fragile nature of the colorful sedimentary rock layers, hiking the four viewing platforms with panoramic views of the mountains in Zhangye Danxia National Landform Geological Park is possible. The mountains, which are roughly a 30-minute drive from Zhangye, contain red sandstone, mudstone, and many other yellow, purple, and green sedimentary rock layers created by tectonic activity and river deposits. The platforms are reached via boardwalks and stairs (each a 10- to 30-minute climb), and a park bus transports tourists from one platform to the next. Visit at sunset or sunrise to witness the most colorful hues.