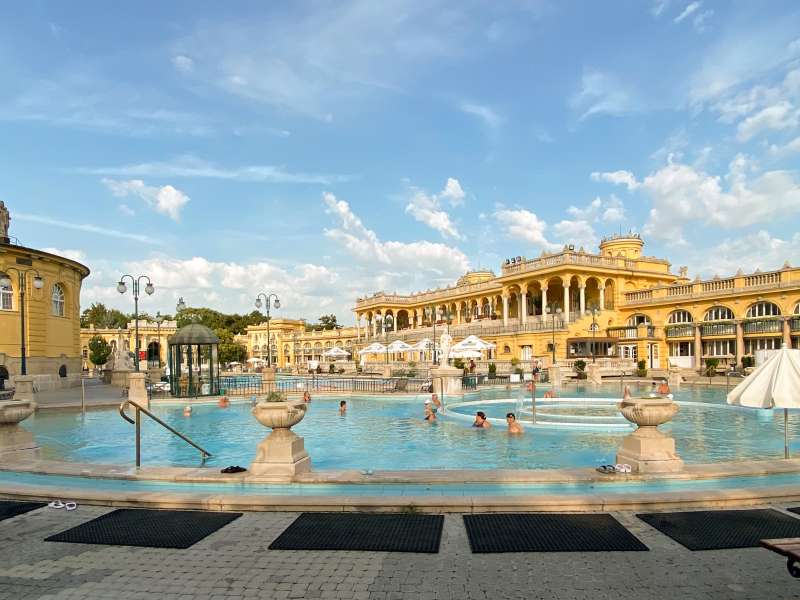 Budapest, often known as the “City of Baths,” is situated on a plate boundary, and its thermal baths are fed by 120 natural hot springs. The city has many thermal spas, which date back to the 16th century. A large neo-Baroque palace, a rooftop pool overlooking the Danube, and an antique Ottoman bathing house open until 4 a.m. every Friday and Saturday are among the best.

Before diving in, remember that bathers must always wear a swimsuit in Budapest’s baths, and swim caps are required when swimming in the lap pools.

Do not spend more than 20 minutes in the hot thermal pools in Budapest’s baths; do not swim in the thermal pools if you are under 14, and do not smoke. Smoking is prohibited in all thermal baths, including the open-air areas.

Széchenyi is Budapest’s largest thermal spa complex, housed in a neo-Baroque palace in Budapest’s City Park. This enormous facility, which dates back to 1913, features 15 indoor pools and three large outdoor pools with varying temperatures. Make the most of your experience at the baths by consulting a map, as the maze-like complex can be challenging to navigate.

Széchenyi is open all year, and locals play chess on floating boards at the pool’s edge, rain or shine. Throughout the summer, “Sparties” (spa parties) with DJs, laser shows, and film screenings are hosted on most Saturday nights until 3 a.m.

Gellért Baths are Budapest’s most stunning bathing venue, with mosaic walls and floors, stained glass windows, and Roman-style columns. This Art Nouveau facility, opened in 1918, has indoor and outdoor baths supplied by thermal springs from neighboring Gellért Hill. The modern outdoor pool offers a wave machine and a big deck for soaking up the rays in the summer. The pools range in temperature from 26 to 40 degrees Celsius (79 to 104 degrees Fahrenheit), and there are also dry and steam saunas, medicinal massage treatment rooms, a carbonic acid bathtub (for cardiovascular issues and high blood pressure), and miniature thermal baths that can be booked privately by couples.

This Turkish-style bathing complex was built when Budapest was under Ottoman authority in the 16th century. An evocative dome surrounds the center octagonal pool, and upstairs there is a modern rooftop pool with views of the Danube. The baths are open until 4 a.m. for night bathing every Friday and Saturday, with water temperatures ranging from 11 to 42 degrees Celsius (108 F). There is a dedicated physiotherapy section for all types of thermal treatments, and healing waters from the Hungaria, Attila, and Juventus springs can be drunk in the main hall.

The Lukács Baths were built in the 1880s, but the hot springs are supposed to date back to the 12th century. Locals and those who are seeking therapy for various ailments frequent the baths. An infrared sauna, a steam bath, a Himalayan salt wall (for respiratory conditions), and a weight bath are among the amenities (to treat spinal injuries). Massages, reflexology sessions, and pharmaceutical treatments can all be scheduled. The venue offers “Sparties” (spa parties) throughout the winter until 3 a.m. on most Saturday evenings, with DJs, laser shows, and film screenings.

The Király Baths are an excellent and economical option for a classic thermal bathing experience away from the throng. It may not be as magnificent as some of Budapest’s spas.

The Turkish baths were built in 1565, and the main pool is housed beneath a traditional Ottoman dome with skylights. The site was destroyed during WWII and rebuilt in 1950. Steam baths, saunas, underwater massage jets, and pools fed by hot waters from the Lukács Baths are now available.

This Turkish bathhouse, built during Ottoman control in the 16th century, was one of the most attractive thermal centers. Some of the original stonework can still be seen surrounding the enormous octagonal thermal pool. The structure houses a hotel and a hospital specializing in water therapy treatments. There are smaller pools with varying temperatures to rest in, a Jacuzzi, a hydrotherapy bathtub, and a wellness area with steam baths, saunas, and massage services.