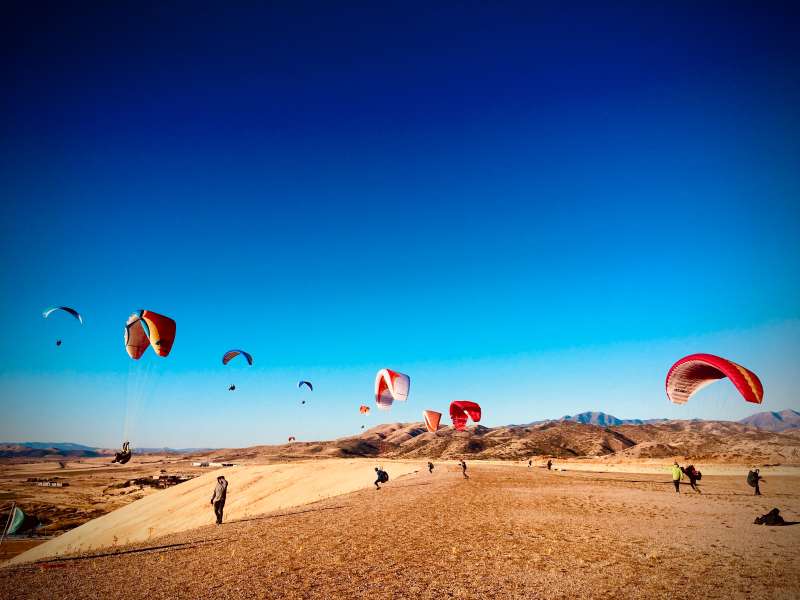 If you prefer staring out the window of an airplane at the world, you might appreciate paragliding, which provides an adrenaline boost in addition to the breathtaking vistas you can see when quietly hovering above a terrain. Even if you’re a novice and must fly tandem with a guide, the sport may seem gloriously alone with just a paraglider and the wind and warm air thermals to lift you.

As long as you fly with a competent and qualified pilot, paragliding is generally a safe hobby. However, there are inherent risks in every adventure sport. Your operator should give you a thorough safety briefing and be prepared to address any concerns or questions you may have.

Paragliding can be done everywhere around the globe, but the most appealing places provide stunning views as well as excellent teaching and ease for newcomers. Below are the 7 of the world’s top paragliding spots.

Queenstown’s location, on one side of Lake Wakatipu and surrounded by the Remarkables range of the Southern Alps, offers spectacular aerial vistas, and the thermals and winds coming off the mountains make it possible to fly for long periods. Louis Tapper, a paragliding champion from New Zealand, achieved a world record with an eight-hour flight in early 2020! Paragliding is possible all year in Queenstown, but the winters are bitterly cold.

The twin towns of Bir and Billing, located in India’s northern Himachal Pradesh state, are the ideal spots to practice paragliding in India, as the foothills of the Himalayan range provide a wonderful environment of mountains covered in forest.

Tandem paragliding flights usually leave Billing and land in Bir. Himachal Pradesh has frigid winters and hot, but frequently wet, summers. As a result, the best months for paragliding in Bir Billing are October to June, albeit December and January are extremely cold.

The hundreds of colorful paragliders drifting behind Pokhara, one of Nepal’s most famous tourist sites, will quickly catch visitors’ attention. Because of the stable thermals and spectacular vistas, Sarangkot Hill, situated north of Phewa Lake, is one of the best spots in the world to paraglide. On one side, the Himalaya’s magnificent Annapurna range (home to some of the world’s tallest peaks), and on the other, Phewa Lake and terraced verdant farms and towns.

Pokhara is often warmer than Nepal’s capital, Kathmandu, due to its lower altitude, so paragliding here isn’t too cold even in the dead of winter. Mid-winter is one of the best seasons to visit because the sky is the clearest. Paragliding is available all year in Pokhara, but flights are frequently delayed between June and September due to monsoon rains.

Gudauri, Georgia, is one of the top paragliding destinations in this region of the world, thanks to its gorgeous Caucasus mountains and consistent weather. Paragliders will take off from a height of roughly 9,800 feet and soar even higher before landing 20 to 45 minutes later, depending on thermal conditions.

Gudauri is a ski resort town, so if you visit in the right season, you can hit the slopes. Paragliding is possible all year, however, temperatures are quite frigid in the winter, as they are in other mountainous, high-altitude places.

Although southern Turkey is best known for its Mediterranean beach resorts, paragliders may get a unique perspective of the sea, Lüdeniz’s Blue Lagoon, and the white sand shoreline from above. The Taurus mountains can be seen from the plane as it takes off from Mount Babada, which stands at 6,500 feet. Paragliders can stay in the air for a long period thanks to the warm thermals that come off the sea, and flights last about 45 minutes.

Due to its pleasant weather, Lüdeniz is a popular paragliding location, in addition to the sea and mountain views. One can go directly from the skies to the sea because aircraft land on the beach.

There are hundreds of sites to go paragliding in Switzerland’s small, mountainous country, but First is one of the greatest because of its stunning vistas of the 13,641-foot Mt. Jungfrau. The first is a 7,109-foot peak located above Grindelwald in the Bernese Oberland.

Swiss paragliding pilots undergo extensive training, so first-timers should feel at ease enjoying a tandem flight with their instructor. If you have an interest in the sport, you can train in Switzerland.

At 4,763 feet above sea level, the Umbrian settlement of Castelluccio is the highest-altitude village in the Apennine highlands. This is one of the best spots in Italy to try paragliding because of the updrafts formed by the junction of the plains and mountains.

In addition to the beautiful views that can be found practically anywhere in the globe when paragliding, Castelluccio provides something unique. With the spring and summer (particularly May and June), the hills and valleys surrounding the town are blanketed in brilliant wildflowers, which are especially wonderful to observe from above.