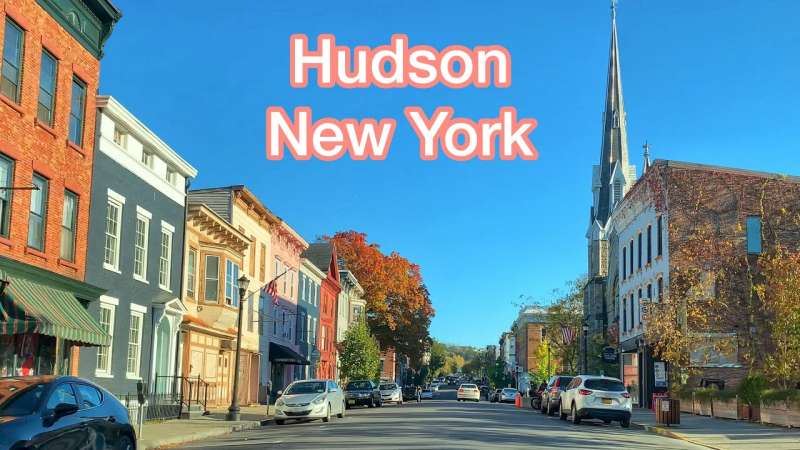 Things to Do in Hudson, New York

On fashionable little Hudson, a lovely and stylish enclave (population 6,200) fronting the Hudson River, around 120 miles north of NYC, the secret is out (and just an Amtrak train ride away). This is the countryside at its most fashionable, a sort of “Brooklyn north” overflowing with buzzing food-and-drink facilities, elegant hotels and design-forward boutiques, midcentury antique shops and modern art galleries, and high-caliber music and cultural venues, most of which are clustered around Warren Street, the picturesque and walkable main drag.

Hudson’s post-industrial slump in the late 20th century has been remarkably reversed over the last few decades, built on the excellent architectural bones of a formerly busy 18th- and 19th-century river port city–turned–raucous 20th-century industrial town. The community is a certifiable hipster haven, a city of relative frugality for priced-out New York City creatives and entrepreneurs who’ve planted their flags here. It’s quickly and solidly gentrified. Discover your motivations to adore this charming riverfront city.

The mile-long Warren Street, Hudson’s beautiful main strip, is a window-heaven. shopper’s The colorful patchwork of 18th- to early-20th-century structures (part of a protected historic district) is brimming with pleasant and stylish mom-and-pop restaurants, bars, entertainment, and shopping. Hudson has a plethora of art galleries and antique shops; in fact, the alternatives for gallery hopping and antiquing are so many that they each deserve their inclusion on this list.

Clothing (try de Marchin for fashionable threads for men and women or Sideshow Clothing Co. for vintage duds), perfumes (2 Note), toys (The Bee’s Knees), furniture and home décor (Lili and Loo), jewelry (Ornamentum Gallery), and more may be found among the varied selection of businesses.

Two unusual hybrid institutions are must-sees in their own right: Visit Spotty Dog Books & Ale, a popular bar/bookshop that hosts live music and quiz evenings, or Flowerkraut, which sells blossoms alongside fermented veggies.

Hudson is revealed as the truly world-class antiquing location that it is after a simple trip down Warren Street, with some spilling into the waterfront warehouses. Antique hunting is a sport in and of itself in this city, which has over 60 antique shops. Antique merchants are often credited with resurrecting Hudson and bringing it out of its post-industrial economic collapse, having set up shop here in the 1980s and proliferated ever since thanks to a steady following of keen-eyed collectors and decorators.

Expect great (and frequently high-priced) collectibles and furniture hidden away in well-informed shopkeepers’ stores and booths, with a special focus on midcentury modern and contemporary pieces. Finch, for vintage furnishings, and newcomer Tom Swope Gallery, for antiquities, are two antique businesses on Warren that stand out from the crowd. The Antique Warehouse, located on the waterfront, is an antique emporium with a plethora of antique-filled shops.

Together with antiquing, Hudson is a mecca for gallery-goers – no surprise, considering the city’s lengthy history as an arts hub, which drew artists from the legendary Hudson River School such as Thomas Cole and Frederic Edwin Church (both of whom resided within a few miles of town). Today, you’ll find about three dozen art galleries clustered largely along Warren Street, a monument to Hudson’s love of the arts.

The Carrie Haddad Gallery, which focuses on regional artists (and is Hudson’s oldest existing gallery space, dating back to 1991), the John Davis Gallery, which features contemporary works by emerging and established artists, and Stair Galleries, which is known for its live auctions, are all worth visiting.

When it comes to art, no art lover should visit Hudson without paying a visit to Olana, Frederic Edwin Church’s former house and studio space. The hugely popular Olana State Historic Site is made up of the Church’s Persian-inspired home (designed by architect Calvert Vaux) and 250 acres of landscaped grounds, which were crafted by the artist himself and are considered one of his masterpieces. The church is revered for its work with the 19th-century Hudson River School of American landscape painting. Fans of Church’s work will recognize the Hudson River and valley views here, which include a patchwork of meadows, woodlands, an artificial lake, and an ornamental farm, as they were immortalized in some of his paintings.

Just make sure you arrange house visits in advance, as access is only available through a guided tour. Church’s collection of furniture, artwork (including a few pieces by him), and tapestries from throughout the world, as well as his home studio, are all on display within.

Hudson is just getting started after dark, thanks to a slew of top-notch music venues and event spaces. Melissa Auf der Maur (previously of Hole and Smashing Pumpkins) and her husband, independent filmmaker Tony Stone, founded the multidisciplinary arts complex, Basilica Hudson. The venue, which is housed in a reimagined industrial factory from the 1880s, hosts a wide range of programming, including music, film, literature, film, art exhibitions, and annual events like Basilica Soundscape, a weekend-long music and arts festival in September, and the semiannual Basilica Farm & Flea, which features Hudson Valley artisans, farmers, and collectors. Club Helsinki Hudson, a music club with an eclectic lineup of live artists and an attached Southern/soul cuisine cafe and event area, is another cultural heavyweight. It’s also located in a 19th-century industrial space that’s been renovated.